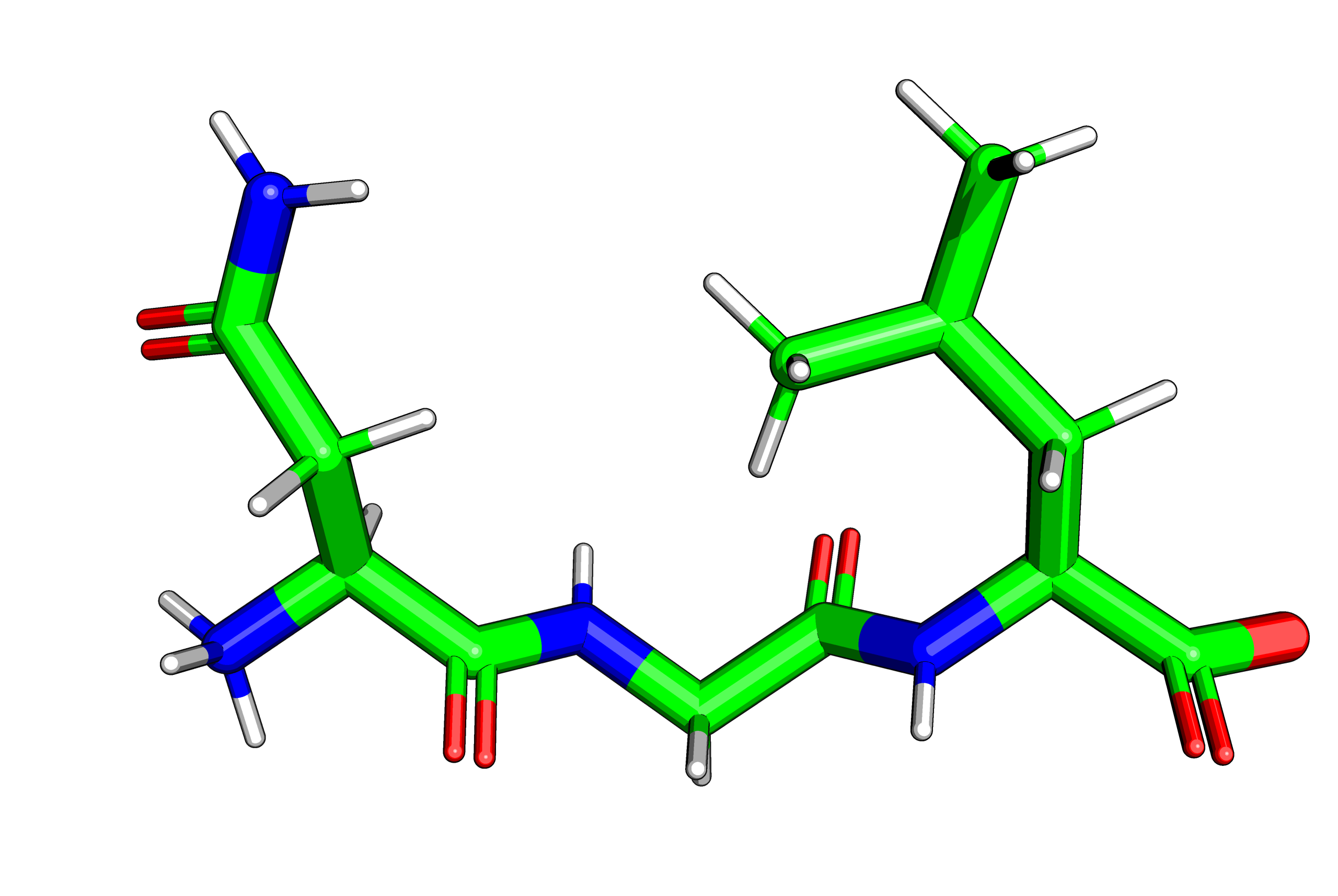 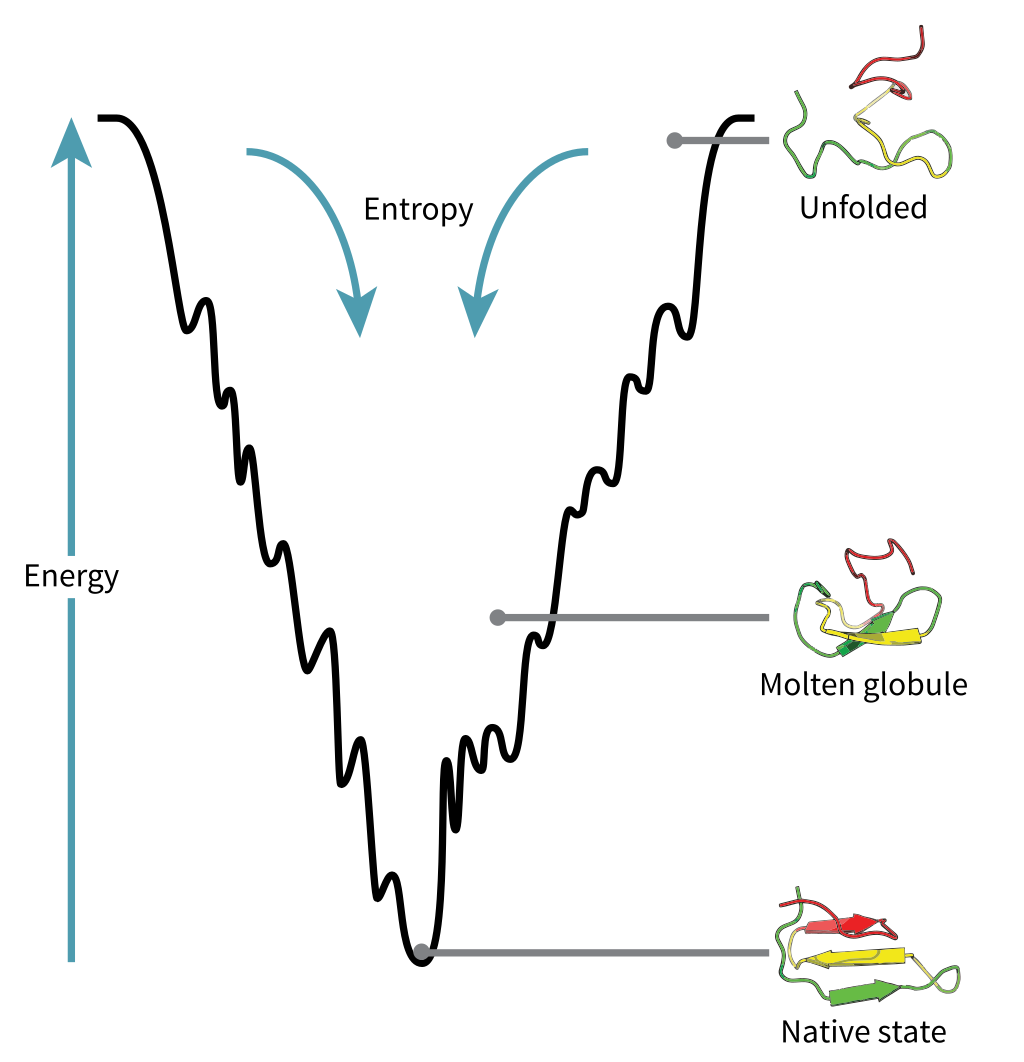 Protein folding funnel (figure credit: Wikipedia)
Protein folding is largely entropy driven. In fact, were a protein to fold by exploring all possible combinations, a scenario known as Levinthal's paradox , it would take longer that the lifespan of the universe. As a consequence of the strong entropic component, a folded protein is energetically more favourable than an unfolded one (downhill). By unfolded, here is intended a hypothetical isolated unfolded protein one, not one that is part of a denatured aggregate.

The Gibbs free energy is the potential energy of the protein (technically a combination of entropy, enthalpy and temperature). The difference in energy of a folded protein relative to the unfolded state is simply referred to as ΔG. This is a negative value as the protein released energy to fold: so the more negative a the Gibbs free energy is the more stable a protein is. This energy is dependant on pressure and temperature. At a given temperature the ΔG is zero: this is the melting temperature of the protein where 50% is fold and 50% is unfolded (and the hypothetically uncrowded protein can return to a folded state).

Therefore a deleterious mutation will have a positive difference in ΔG (ΔΔG) and a lower theoretical melting temperature. A deleterious mutation, however, does not need to increase the ΔΔG all the way to zero to be deleterious in vivo: a sufficiently large local destabilisation of the structure is sufficient to cause the protein to aggregate and therefore be targetted to the proteasome.

The difference between wild type protein and a mutant is dictated by the strain on torsion angle of the atoms involved and by difference in non-covalent bonds.

The meaning of kcal/mol

The units used to describe the Gibbs free energy and other energies in biochemistry is kcal/mol. Although, like for Kelvin and Celcius, kJ/mol may be used, 4 kJ/mol are 1 kcal/mol. An often cited value is that of the C-H bond, which is 100 kcal/mol, or that of a peptide bond (20 kcal/mol), but protein folding does not break bonds, so this is misleading. In fact, the strength of the interactions involved are smaller:

The non-crystalline water surrounding the protein in the meanwhile is colliding and the average collision has 0.7 kcal/mol, as determined by multiplying the Boltzmann constant by the temperature (which for our discussion is 37°C).

Different terms are combined to form the energy function (figure credit: Wikipedia)
The potential energy of a small molecule or a macromolecule can be described by an equation that is the sum of a variety of terms that describe the interations between each atom of the molecule. This equation use a parameterises derived from specific physicochemical data. Such a combination of a function and the parameters is a full-atom classical-mechanical force-field model . Different force-field models exist. In VENUS the calculations are done with pyrosetta. This is not technically a traditional classical-mechanics force-field as it includes terms derived from empirical data that better fit the protein, such as improved hydrogen bonding between distant residues. Nevertheless, the units of the score function used, ref2015 score function , are approximately equal to kcal/mol at room temperature.

However, other properties impact on the behaviour of a protein, independently of its interactions. For example, the isoeletric point (pI) of a protein has profound effects on its solubility regardless of how stably it is folded. Specifically, a protein is less soluble (i.e. will aggregate) if the pI is close to the pH of its environment, supposedly pH 7.4. Another example, is the presence of a large hydrophobic path, which physiologically behaves differently than in similations of an isolated protein, namely by forming aggregates.

For more see Chemical Bonds in Biochemistry in NCBI , protein folding in Wikipedia