Since the release of the genome of the new coronavirus (2019-nCoV), there has been a flurry of open activity both on the vaccine front and on the drug design front, including several clinical trials to repurpose several existing drugs. In terms of structural biology, the structure of the 3C-like protease was released on the 5th February and was quickly followed by several other structures.

The most studied of the coronavirus enzymes is most definitely the protease 3CL (also known as MPro). Here shown with its substrate (protease from PDB:6Y2E and peptide TSAVLQSGFRK from SARS protease PDB:2Q6G).

To save genetic space, many RNA viruses employ a strategy wherein different protein acting at the same stage of the infection cycle are produced as a single long peptide that gets cut up by a protease at given recognition sequences. In the case modelled here, between a glutamine and a serine. 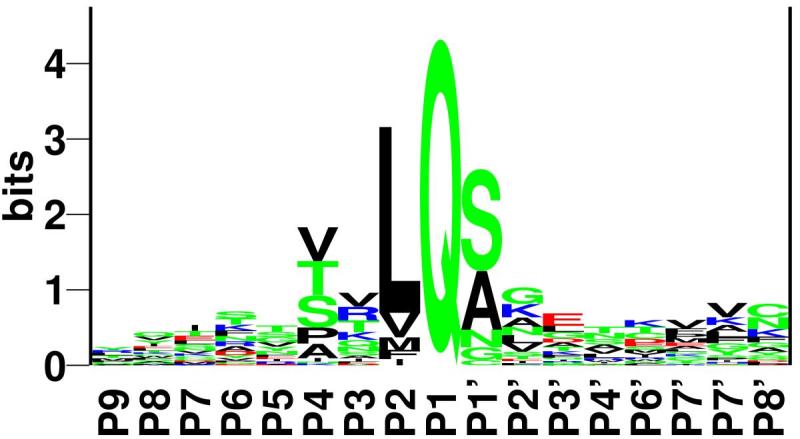 A protease works thanks to a catalytic triad: an acid hydrogen bonds to a base, which in turns deprotonates a nucleophile making it more active. In the case of viral protease the acid is part of the ligand, so it's a dyad. With 2019-nCoV (and SARS) histidine-163 is the base and cysteine-145 is the nucleophile.

The cysteine attacks the backbone ketone of the glutamine of the substrate. The tetrahedral hemiacetamide intermediate is highly unstable and the N-terminal half of the peptide leaves. The thioester between the enzyme and the intermediate is more stable but undergoes a substition reaction with water (hydrolysis) freeing the enzyme for another round of catalysis and releasing the second half of the substrate.

It is clear why viral protease made good candidates. In fact, the crystallisation of the HIV protease was a big deal —appearing the Voet and Voet textbook and featuring in the book The Billion-Dollar Molecule and there are many HIV protease inhibitors on the market (NB. HIV protease has a diffent structure but works on the same principle).

The first structure (PDB:6LU7) of the 2019-nCoV protease was released with the candidate drug called "N3" found by the same authors in a SARS protease drug screen (Yang et al., 2005) —the 2019-nCoV protease is 96% identical to SARS protease (also a coronavirus). How it works is that the reaction starts, but gets stuck because the substrate is not quite the same. First, the nucleophilic cysteine attacks the substrate, but, instead of attacking a ketone of a peptide bond like a normal hydrolysis, it goes for the more electrophilic double bond next to it, which therefore acts as a Michael acceptor, forming a very stable, so goes nowehere and the enzyme is broken!

In terms of the structure of the peptide N3, reading it from the N-terminus (biochemistry way, as opposed to chemistry way): N-terminal cap - alanine - valine - leucine - Michael acceptor amino acid analogue with a oxidanylidenepyrrolidine side chain - C-terminal cap. The AVL part is the same as the consensus sequence, but then instead of a glutamate there is an amino acid of similar length that has a closed ring at the end. However, this large peptide has micromolar affinity for the protease of SARS and is very large, making it not ideal as drug (cf. Lipinski's rule of five).

The next inhibited structure, contains what the depositors call alpha-ketoamide 13b. This consists of: N-terminal cap - an aromatic ringed backbone amino acid - cyclopropylalanine - the same oxidanylidenepyrrolidine side chain amino acid as N3 - C-terminal cap. That is cyclopropylalanine is taking the place of leucine and the more rigid cyclic amino acid is taking the place of valine. The reason for the latter is that peptides are very flexible, which makes them less drug like.

Recently Diamond have done a fragment screen against the protease. Fragment screens are great as starting data for virtual screens as the protein side chains or mobile loops may adopt different conformations potentially resulting in stronger affinity.

There are other enzymes in 2019-nCoV that are not crystallised, most notably the RNA polymerase (nsp12), which is potently inhibited by the drug remdesivir.

the I-Tasser authors have released the predicted protein structures of all of the proteins in the viral genome.

Michelaɴɢʟo is an accessible and open-source web-based application which supports the generation, customisation and sharing of interactive three-dimensional macromolecular visualisations for digital media without requiring programming skills. PyMOL file, PDB file, PDB identifier code or protein/gene name can be provided which form the basis of visualisations using the NGL JavaScript library. Hyperlinks that control the view can be added to text within the page. Protein coding variants can be highlighted to support interpretation their potential functional consequences. The resulting visualisations and text can be customised and shared, as well as embedded within existing web sites by following instructions and using a self-contained download.

Proteins are chains of L-amino acids linked via their backbone atoms (carboxyl and amine of the α carbon). This sequence of backbone atoms is represented by the (green) ribbon-like structure.

When the backbone atoms hydrogen-bond with each other in a consistent way secondary structure arises.
α-Helices are represented as spirals, while β-sheets appear as adjecent flat strands.

Some residues of interest are represented as ball and sticks like akin to an old chemistry set. In these representations the atoms are colour-coded based on the element. Carbon can be any colour, while nitrogens are in blue, oxygens are in red, hydrogens in white, sulfurs in yellow and phosphorous in orange. The latter is found as phosphate groups so will appear as a distinctive red-tipped orange tetrahedral end of a sidechain. Ions are represented by a variety of colours. But are generally represented as spheres of the correct atomic radius.

Add structure from another pages

A single page can support multiple models, which can be toggled via data-load in the prolink (a link that control the protein view).

To show a structure, two pieces of information are needed:

This applies also to cases where the structure is taken remotely (e.g. PDB database).

Note that editing the JS in blocked for regular users (due to security concerns), please speak to the site admin if you would like to alter your permissions. Also note that this page will refresh in order for the changes to be made.

Create a second structure where a set of amino acids are replaced using PyMOL's mutagenesis algorithm. This will alter only the side chain of the residues mutated and does not repack the neighbouring sidechains nor does it account for blackbone torsion. Note that this page will reload for the changes to be made, so make sure you have saved the edits to the text beforehand.

This page has a custom load function, which will be lost with this option! Are you really sure you want to continue? If unsure, please cancel this window!
No revisions for this are kept. Any edits cannot be rolled back.

This tool allows you to alter the initial view of the protein that is seen once it is loaded. See documentation for more.